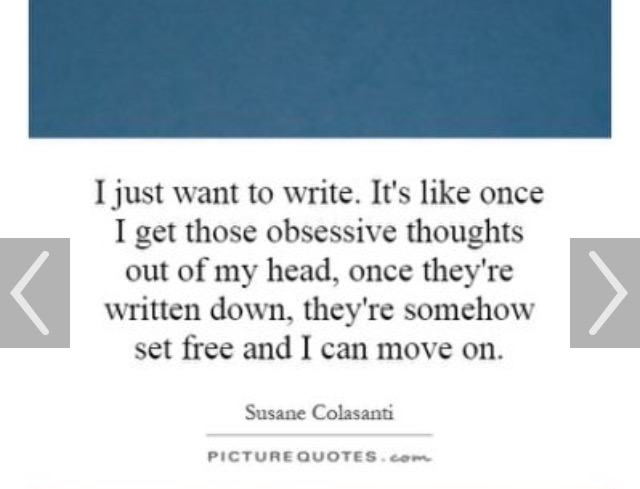 Yup 2 posts in one night , but as the picture above so aptly states sometimes you just have to write it down.

Ear worm , a word I recently heard describes those times when you have that song stuck in your head and it goes round and round and round … replacing it with another song is usually the only way to get it out of your head.

Now imagine that it was not a song but thoughts of that off hand remark someone said, or something you said , or your health, or whether or not your husband loves you.

There are many studies which give a direct connection with obsessive thinking and Bi Polar . It’s an accepted fact in the mental health world that People with Bi Polar will often obsess about anything and everything.

Some examples, my husband doesn’t answer his phone when I know he is on his lunch hour, the thoughts begin, is he with a female colleague, is he having an affair , by the time he calls me back 10 minutes later my mind is already throwing his clothes out the door, convinced he is having an affair.

Having obsessive thinking with Bi Polar is like being on a constant daily roundabout. It’s not a matter of  will I obsess about something, but more a matter of what today’s obsession will be.

Often it is harmless, getting the house in perfect order, being the best I can be at work, making the perfect meal .

Mainly though it is not healthy. For example today. A few weeks ago someone said a harmless comment to me, it was a comment meant to help me, it was during a conversation in which she was guiding and supporting me, but because of my Bi Polar and because of my obsessive thinking it was all I could think of today and for quite a few days.

The obsessive thinking will lead you in a direction that you have little or no control over, googling the person , bringing them up in conversation etc.

It can affect your daily life, it is exhausting.

I am used to being told I am ” over sensitive ” a word which I have come to hate … I do not think anyone can be over sensitive, everyone has their own fragility, everyone is insecure about something and we don’t know if the comment made can touch that person deeply , for the good or bad.

I know I am having a good Bi Polar day when thoughts flow seamlessly from one to the other, obsessions only last for a little while and they can be replaced.

Today is a bad Bi Polar day, where an obsession about someone has stayed with me for to long.

Whilst having these obsessions all other clear thinking goes out the window, you are unable to concentrate on anything.

So how do people who have bi Polar related obsessive thinking get off the roundabout ? How when it is turning faster and faster, when your brain is completely overrun with the one thought do you stop, do you shout ” I want to get off “!

With my form of this thinking I need to firstly if I am able to talk to the person or write … and I have now done both.

This site uses Akismet to reduce spam. Learn how your comment data is processed.